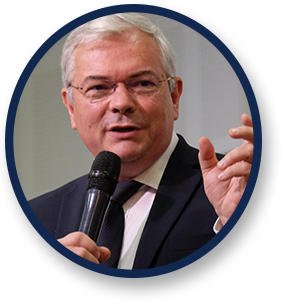 After a higher education in audiovisual, Thierry Le Gall completed a 20-year career in communication for the Ferrero Group. This was followed by studies with the Free Faculty of Evangelical Theology at Vaux sur Seine and a pastoral formation course within the Union of the Assemblies of God of France. The latter entrusted Thierry Le Gall with the responsibility of local churches and social actions in Upper Normandy and Brittany during fifteen years
He worked jointly as Director of Communications of the ADD ( Assemblies of God) and CNEF ( National Evangelical Council) from 2011 to 2014 and then as Director of Communications of the CNEF in 2015.

Thierry Le Gall was appointed Director of the CNEF Pastoral Service for Parliamentarians on 1 January 2016.
He is certified in the “Emouna – l’Amphi des religions” cycle of Sciences-Po Paris promotion 2017/2018

Married to Sylvie since 1984, he is father of 4 children and grandfather of 3 grandchildren.